Coming Together as a Community to Help a Patient in Need

“It’s a reflection of everybody as a whole,” says Owasso Fire Department Captain Aaron Greenburg of being recognized as the recipient of the Bailey Medical Center Community Star Award. “We just happened to be on duty that day. You can call anyone here, church or other organization, and you would have gotten the same response, if not more. It is the spirit of Owasso.”

It was a cold winter day in 2013, when a man walked into the Emergency Department at Bailey Medical Center cold and wet from the storm. He had been living on the streets of Owasso, passing through town. ED staff recognized he not only needed medical attention, but also respite from the weather. His clothes and possessions soaked, Bailey ED nurses reached out to the community for help. “When hearing of what Brandi, RN and Kelly, RN had facilitated to help this patient in our ER, we were so proud of what they had done, however not surprised at all,” shares Bailey ED manager Debi Eason, RN, BSN. “Owasso Fire was more than ready to assist.” 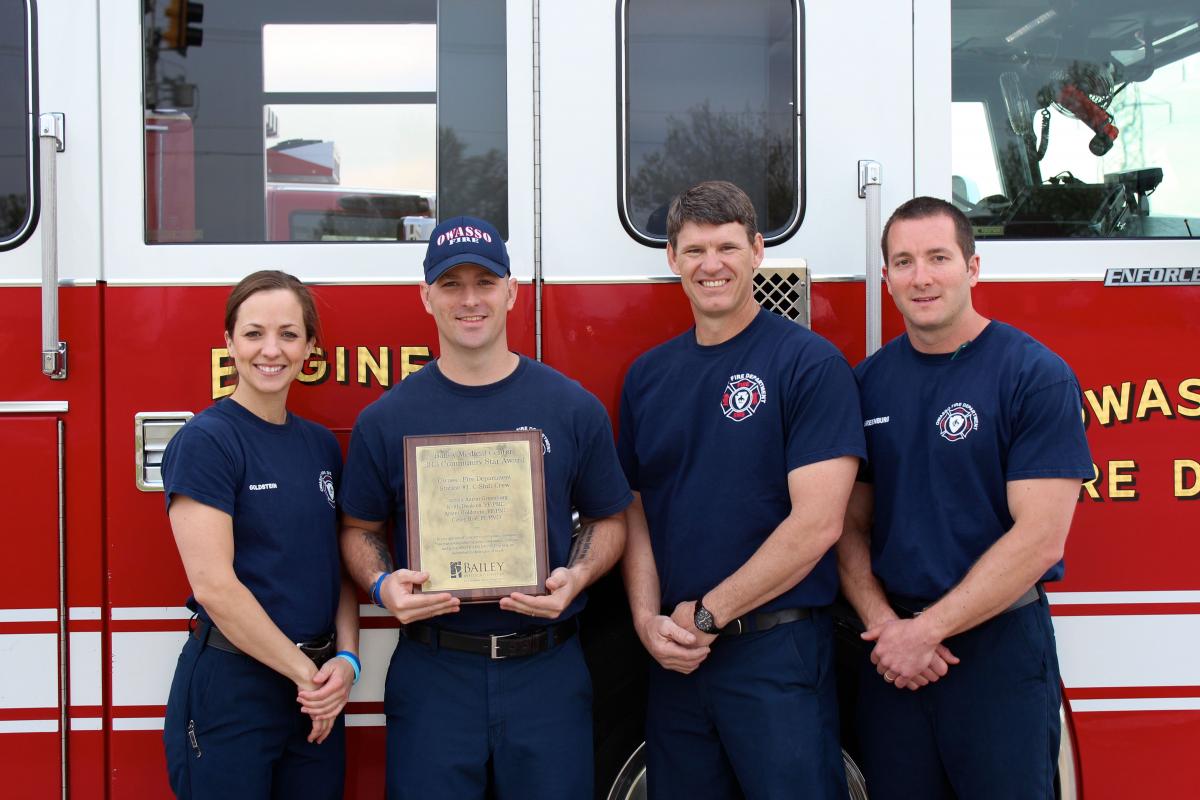 “We wanted to go that extra mile to make it as pleasant and meaningful for him,” says Captain Greenburg thinking back to the call they received to launder the patient’s clothing and sleeping bag. Owasso fire fighters picked up the patient’s belongings, returning with everything clean, dry and folded, while he was being treated.

“The nurses then contacted First Christian Church,” says Debi, “explaining the situation and they were also very quick to offer their services.”

“People will go through tough times, and we as a church want to be known for the way we love the people of our community,” says First Christian Church of Owasso Community Director Dereck Maloy. Members of the church made arrangements for transportation and an overnight stay at a nearby hotel for the patient once discharged.

“It was one of those times everything lined up and worked out beautiful,” adds Debi. “This was the perfect example of multiple pieces coming together for the better of a human being, regardless of their situation.”

Captain Aaron Greenburg and his department at Station 1 received the Bailey Medical Center Community Star Award at a hospital service awards evening in December. They are the first to receive the recognition. “Bailey is honored to provide healthcare services to the Owasso community and its surrounding areas,” shares Debi. “Because of this close community tie, we wanted to find a way to honor the citizens and first responders in this area who have shown above and beyond extraordinary service to an individual(s) in their time of need.”

“We’re used to helping other people out, it was very meaningful for us to be recognized by another organization in the community,” says Captain Greenburg.

“When you are in the healthcare and first responder profession, we often see people in their worst imagined scenario,” adds Debi. “They are often injured, scared, in shock, and grieving. The men and women that do this day in and day out, often a nameless, faceless individual, always serving and making a difference when someone needs them most. We thought what better of a way to recognize and celebrate their unwavering service to their community that was exemplified with compassion and humility. With that the ‘Bailey Community Star Award’ was born.”