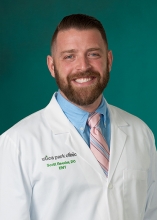 Scott Reeder, D.O., is an Ear, Nose & Throat specialist (or Otolaryngologist). Dr. Reeder earned his Bachelor of Science Degree in Neuroscience at Brigham Young University – College of Life Sciences in Provo, UT in 2008. He received his medical degree from Rocky Vista University – College of Osteopathic Medicine in Parker, CO in 2012. He completed his General Surgery internship and Otolaryngology/Facial Plastic Surgery residency at the Oklahoma State University Medical Center in Tulsa in 2013 and 2017, respectively.

While obtaining his education and training, Dr. Reeder received several honors and awards including:

Dr. Reeder has served our country and state in the Oklahoma Air National Guard since 2013. He is a Flight Surgeon for the 138th Medical Group. He was deployed as to Lodz, Poland in May, 2016 and served as Chief Medical Officer.

His international efforts include a humanitarian mission for The Church of Jesus Christ of Latter Day Saints in Culiacan, Sinaloa, Mexico from 2003 to 2005.

He is fluent in English and Spanish.

Dr. Reeder welcomes new patients and accepts most insurance plans. His office is located on the campus of Bailey Medical Center at: